Pertussis is an infectious disease of childhood caused by the release of multiple biological active toxins from the bacteria Bordatella pertussis and Bordatella parapertussis.

The illness usually begins as a mild cold, which lasts for a week.  Then the characteristic cough starts, which makes this disease recognizable, especially when it occurs in children.  It usually lasts for at least 6 weeks regardless of treatment.

Despite widespread vaccination, pertussis still occurs with regularity as a common childhood disease.

This widespread use of the vaccine began in the late 1940s.  However the mortality rate from this disease had already been declining for decades.

In regards to how effective the vaccine for pertussis is, a CDC publication in 1997 stated, “The findings of efficacy studies have not demonstrated a direct correlation between antibody response and protection against Pertussis disease.”
MMWR March 29, 1997/Vol.46/No. RR-7, p.4 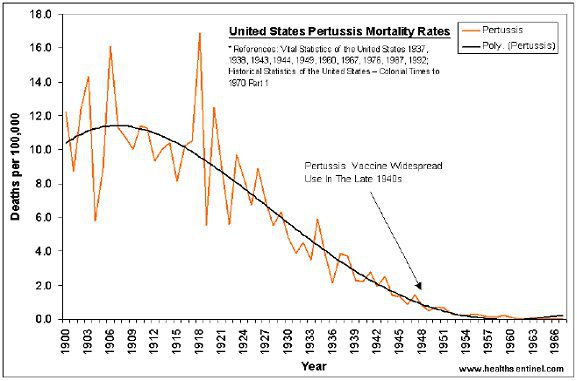 Pertussis mortality rates declined prior to use of vaccine